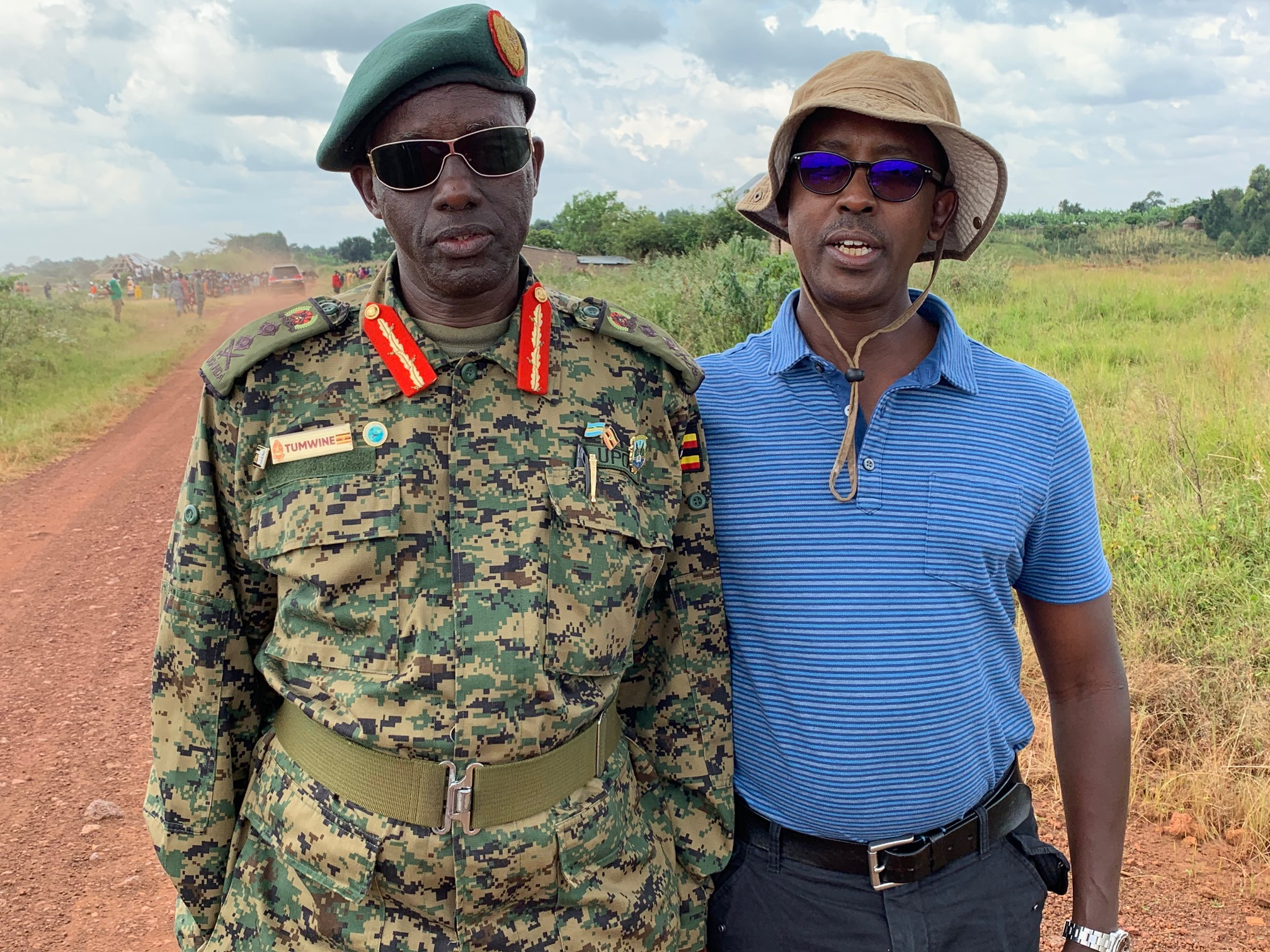 He taught us to live out our purposes and have nothing to fear other than our self-loathing spirit!’

Three days ago, I watched a young news anchor on one of the local television stations announce the death of Gen. Elly Tumwine with what I felt was the casualness of an ordinary story, one that is quickly eclipsed by other oncoming events. Part of me felt perhaps we have come to terms with the death of those we love to take the shock out of the news. But, somehow, an unsettling feeling took hold of me, moments later. In my heart I knew this wasn’t an ‘ordinary’ death; it was an iconic representation of the passing away of a generation who some of us hold as symbols of the big shift that restored our country on to the path to progress, whatever opinions their opponents hold about them. Tumwiine held a brightly lit torch for this generation! To wake up and know he is no more is to say an era has ended.

There was a time when death took the NRA with rapidity a few years after the 1986 takeover that we even thought none would live to tell the story of the bush war. Patrick Lumumba, Stanley Muhangi, Mugisha ‘Headache’, Napoleon Rutambika, Kamwanamwaana, Ronald Bata, Jet Mwebaze, Benon Tumukunde, Frank Guma, Marius Katungi ‘Suicide”, Tadeo Kanyankore, Akanga Byaruhanga, and others all passed away in successive order. I thought then the country would probably not retain any element of these men and women to write for the young generation about a Uganda they encountered, one that changed their destiny, inadvertently turning them into soldiers. And then, God gave us respite, perhaps for some of the survivors to write including Gen. Pecos Kutesa whose account makes for a good script of a thriller. But since 2015, we have witnessed a resurgence of the enemy of death in this camp with Generals Aronda Nyakairima in September 2015, Taban Kyabihende, in 2017, Stephen Rwabantu and Pecos Kutesa in August 2021, and now Elly Tumwiine, all gone.

In the ancient Middle Eastern tradition of tending sheep, a shepherd brought his flock into an enclosure for the night; and instead of putting a door at the entrance, he would turn himself into the very door by lying at the entrance of the Kraal to protect his flock from wild animals, thieves or any danger, making himself a sacrifice for his sheep’s survival. This is the practice that Jesus mentions in the gospels when he makes reference to the owner of the sheep who does not run away from danger. In many ways, soldiering presents life this way, for often a soldier gives up his own life for other people to enjoy theirs.

This crop of the NRA fighters, whose exemplary acts of sacrifice and devotion as young people then; people that Tumwiine has been a symbol of in the last 42 years, stand a shoulder above many in the history of our country. Tumwiine reminds me of the 1830s French revolutionary wars painter, Eugene Delacroix who said, “If I haven’t fought for my country, at least I will paint for it”, only that he (Tumwiine) adroitly and beautifully combined both fighting and painting for Uganda - doing it all with grace, energy and humility that he would break into song and dance abandoning all manner of pretense at protocols and military titles so that he could reveal his true creative spirit and talent. He did this, sometimes with a rebellious and contrarian streak, in what he told us was freedom from social western European constrictions of dress, food, and customs that came with education. He did this so he could create afresh from his cultural experience and from his heart.

His shirts and shoes were unique in design and material as if to give all of us a message – ‘live life as who you were created to be; you have nothing to fear or lose, only perhaps your self-loathing spirit’. Like many deeply reflective leaders in military and political history – Oliver Cromwell, Napoleon Bonaparte, Mao Zedong, Fidel Castro, Samora Machel, Thomas Sankara, and Yoweri Museveni, he was steeped in the romantic tradition of painting, singing, writing, composing, an eye for the study of nature, art, design and all that straddles the space between the human creative spirit and prevalent culture. He equipped many of us with new ways to see and communicate our world. He taught us with his actions both in and out of uniform to cultivate a depth of conviction in order to live life fully, to stand against the shallowness of passing fads that come with a rapidly changing country, to balance thoughtfulness with the impulsiveness and impetuosity of youth, to be ridiculously courageous with risk while maintaining patience that life will turn out well against all adversity. Most importantly, he taught us to think outside the box, to imagine things that are not as though they are, and that if you can think it, you can create it.

Two moments personally stand out for me with Tumwiine. It was late evening on September 20, 2015, the day we buried Gen. Aronda and some 24 hours after I had been, without notice, removed from the leadership contest for the NRM in the West. We bumped into each other at a green and white painted fuel station that lies at the intersection of the road going to Rukungiri and one to Kabale town, just outside Ntungamo city. I was refueling and he and his security detail were buying food and drinks in an adjacent minimart. He came over to me and pulling me by the hand, we walked across the paved yard, to a quiet place a little way out of the view of other station users. He asked me in a surprised tone what had happened to my bid the previous night to which I said, I had no idea given I had also just heard from the news while teaching Bushenyi on the morning of September 19, 2015. He asked if I needed help to speak to the gentleman I had run against or any leader in the party to which I said, there was no need given a decision was made without letting me know why meant my case was sealed. Without saying much, he left for his car but his countenance betrayed his feelings. I never got to ask him about this again but he seemed to me that day as someone going through emotions and concerned about an injustice done to an individual. I had known him for many years but that moment left an inquisitive thought about who this man was at the core. He hated injustice. The second moment was in January 2020 during the trek from Galamba (Luwero) to Birembo (Kakumiro). I watched him and Generals Steven Kashaka, Julius Kihanda, Pecos Kutesa, and some of the surviving NRA officers who were on this trek, surround their commander in chief, often pushing off the President’s bodyguards and standing tall with him and freely explaining to the people we met on the trek. There is a beautiful picture I took with my cellphone of one of the moments and I thought to myself, I will probably never see them again together this way. Fate has a way it fulfills some things. Two of these men, Pecos and Elly have departed.

We will miss Gen. Tumwiine and all his colleagues that have died over the years but we must never give up on the teaching and practice of the ideals they stood for even if circumstances have changed and people make some of the principles they fought for, a matter of bread and butter; a thing for use in jostling for positions of influence, power and resources. This trivializes this incredible example of chivalry, selflessness, and service beyond self. Above all, the biggest sacrifice was made by the people of Bulemezi, Buruli, Singo, and Bunyoro, whose homes and lives were shattered so that all of us as a country can reclaim what we lost in the constitutional crisis of 1966. It is to these people and their children that we must rededicate ourselves in order to strengthen the culture of tolerance, help build an economy that will guarantee jobs for them, and provide an education that will help them compete in a difficult world. Tumwiine leaves us in transition. Like all good things that must be protected and nurtured, there is contention about the values of the Movement and whether all we have learned and believed in the last 42 years from these founders, will survive to the next generation. God keep his soul in peace!

To get in touch with Odrek, please fill the email bellow.